50 years ago, Franco and Luciana De Gemini had recently moved to Rome, both looking for their place in the world. He a talented musician, she a beautiful young bride, they lived in a small penthouse with a huge terrace full of flowers and views that spanned Rome, from the dome of St. Peter to the Altar of the Fatherland to the Castelli Romani: over 40 kilometers of the Eternal City.

Through his collaborations with many great maestros of the period and his involvement with the orchestras, Franco got to know many people including Fulvio Corradini and Benito Costa (the former an administrator of prestigious record catalogs, the second a trusted friend). In fact, they had already caught wind of a small record label called Beat Records Company, founded on May 12, 1966, but the two had no time to devote to the endeavor so they trusted its administration to Franco De Gemini by actively involving him as a partner.

It was an Intense fifty years, always with one foot on an airplane, in a smoke-filled recording studio, in front of a Moviola viewing the scrolling images of film or around a table with incredible characters, to talk, create music and art, or simply to enjoy life.

That little two-year-old son that was once picked up and held by Franco and Luciana is now a man of 50, a man with whom generations of film and music fans have been able to cultivate their passions, served and revered by the tireless work of this incredible couple.

Having reached this important landmark in time, with over half a century of history behind us, we decided to revive five significant favorites from our musical catalog and replicate them in their original format, a tribute to our past and yours.

The fifth appointment of this revival is with one of our scores unreleased on vinyl, ALLA RICERCA DEL PIACERE by Teo Usuelli, a score we love deeply for a movie featuring the divine Barbara Bouchet, a beautiful icon beloved on both sides of the ocean. The music--iconic as well, and among the most appreciated in our catalog--has been included on Beat at Cinecittà albums and used by the Cohen bros., who included PIACERE SEQUENCE M36 in The Big Lebowsky. What more shall we add? Thank you, Maestro Usuelli. 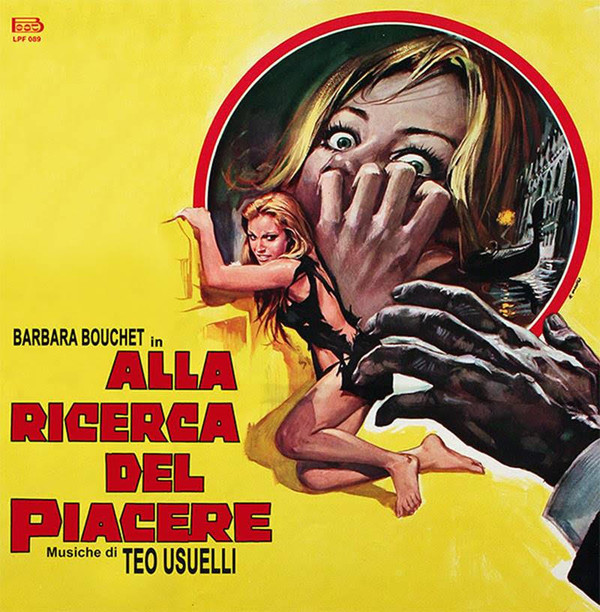