"In 1967, 1968, and 1969 most of my works were happenings loosely based on Lewis Carroll's The Hunting Of The Snark, a not-so-cryptic poem that, to my mind, gave clues to free the theater in the same way the 'new music' had freed jazz. It never made it to record and I gave up on the idea when I met Sunny Murray and Alan Silva when they arrived in Paris in the summer of '69. Few concert venues would have anything to do with us but we didn't want that kind of connection with the public . . . Galleries, museums, and art/theater/dance festivals, on the other hand, were open to this early multimedia event -- complete with films, masks and early electronic devices (Bernard Vitet, the trumpet player, brought an early portable reverb system to the proceedings). The reels and cassettes we rescued from my basement are rather evasively labeled and the following data is far from precise. The core group was me on piano, Bernard Vitet on trumpet and electronic treatments, Beb Guérin on double bass, Daniel Laloux as MC, Jean Frenay and Jean Vern on saxophones, Michel Kurylo, Annick Astier, Lambert Terbrack, and my then wife Françoise Tusques 'singing' and 'acting', so to say. Jacques Thollot, Aldo Romano, and later Noel McGhie were on drums. I know for sure side A is a studio recording carried out in August 1968 by the comité action musique, an activist group of artists and engineers aiming to reclaim the means of production from the 'record industry'. The line-up is me, Vitet, Guérin, Laloux, Frenay, Vern, Astier, Françoise Tusques, no drums (everyone doubling on percussion), and Michel Portal on bass clarinet and saxophone as guest. Side C is a montage of the surviving bits of the happenings that took place at La Vieille Grille between August 1967-March 1968 (sometimes on a daily basis in '68!), the museum of modern art during the May '68 demonstrations, and the Biennale Of Paris in February 1969. Sides B and D are less theater oriented and may have been recorded either at the American center in October 1968, the international students center in November 1968 (Barre Phillips on bass and Barney Wilen on sax guested on these dates but I'm not able to confirm they are on the tapes), or in the winter and spring of 1969. However, the cassette for side b only read "Snark 1969"... The name of the group (it changed every time it ventured out), the title of the concerts and accordingly the cuts on these LPs were all lifted randomly from Lewis Carroll's poems and novels." --Francois Tusques 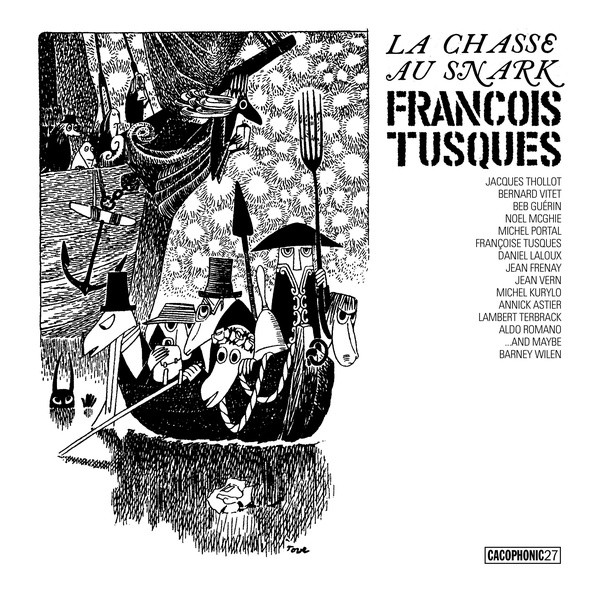