Sommor Records present a first time reissue of Zarpa's Los 4 Jinetes del Apocalipsis, originally released in 1978. Spanish proto-doom/psychedelic hard-rock monster from 1978. A conceptual album featuring five long tracks with raw in-your-face sound and production, over-charged fuzz and wah-wah guitar, powerful vocals with killer echo/reverb and studio effects. This is must for any hard rock/metal/heavy psych aficionado. Formed in Mislata, Valencia, in 1977 by four teenager friends (Vicente Feijóo on lead vocals and lead guitar, Eduardo Feijóo on bass and vocals, Javier Herviás on guitar and Jesús Martinez on drums), Zarpa Rock ("Claw Rock"), later shortened to Zarpa, evolved from a group called Wolframio. After spending most of 1977 learning how to play their instruments, they were approached by a management agency called Zeus Rock, joining their roster in company of bands like Doble Zero. Under Zeus Rock guidance, the band did their first recording: a conceptual album titled Los 4 Jinetes del Apocalipsis (The Four Horsemen of Apocalypse) which due to low studio budget, was recorded "live in the studio" in a single one-hour-and-a-half take. After the bankruptcy of Zeus Rock, the proposed album project was shelved. Zarpa shared stage with legends like Ian Gillan and later on, in the heyday of heavy metal in Spain, they managed to release two more LPs which established them as a very popular band, even opening for Barón Rojo, true metal stars in the early '80s. Including insert with liner notes and rare pictures from the archive of Vicente Feijóo, the original guitarist and vocalist from Zarpa. Heavy carboard sleeve and OBI. 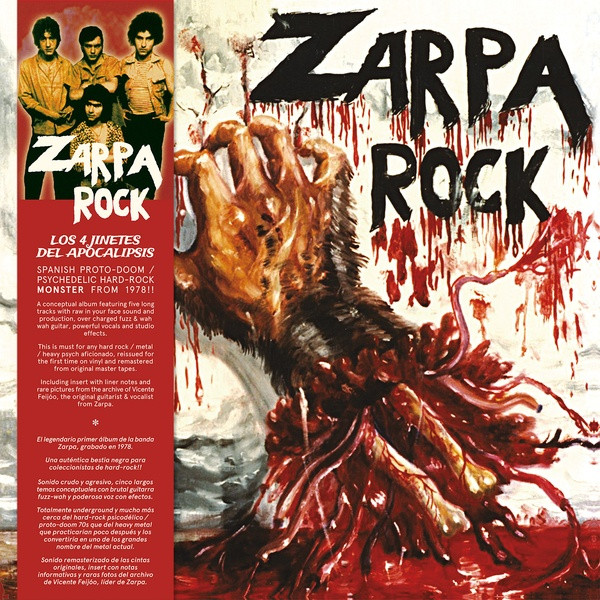