For our immense pleasure, Visual Impact includes the insanely ace “Nuplex” by Brian Bennett, a nagging, sweeping, punchy funk piece that exists in a world of its own. If you don’t know, get to know – the record’s worth getting for this track alone. The same goes for the beautifully paced, string-drenched, horn-fed LP opener “Canaveral Scape”, courtesy of John Scott. Truly sublime. Other highlights on the A-side include Bennett’s easy, bass-heavy jazz groover “Sequence Of Events” and the spare, building, undercover funk of Steve Gray’s aptly-named “Low Profile”.

The B-side is straight-up fantastic. The percussive, vibey exotica of Jim Lawless’s “Keeping Pace” is followed by five tracks of slick, weighty funk breaks from Johnny Pearson. Check the pure groove of “Jaguar” with its head-nod drum break intro, the creeping piano-strings combo and… er… giant neck-snapping breaks of “Giant’s Causeway”, the speaker-smashing progressive bass groove of “Fugitive”, the tense “Rock Climb” and the sheer heft of “Heavy Load”. Library largeness. If that isn’t enough, John Scott’s incessant “Flight Of The Phoenix” ends the session, brilliantly pilfered by M.O.P. for their much-loved “We Run New York”.

Originally released in 1976 but wonderfully timeless, Visual Impact is a rare example of a library record that’s genuinely great listen from start to finish. Just too good…

As with all of our KPM re-issues, the audio for Visual Impact comes from the original analogue tapes and has been remastered for vinyl by Be With regular Simon Francis. We’ve taken the same care with the sleeves, handing the reproduction duties over to Richard Robinson, the current custodian of KPM’s brand identity.

And don’t worry! Those KPM stickers aren’t stuck directly on the sleeves! 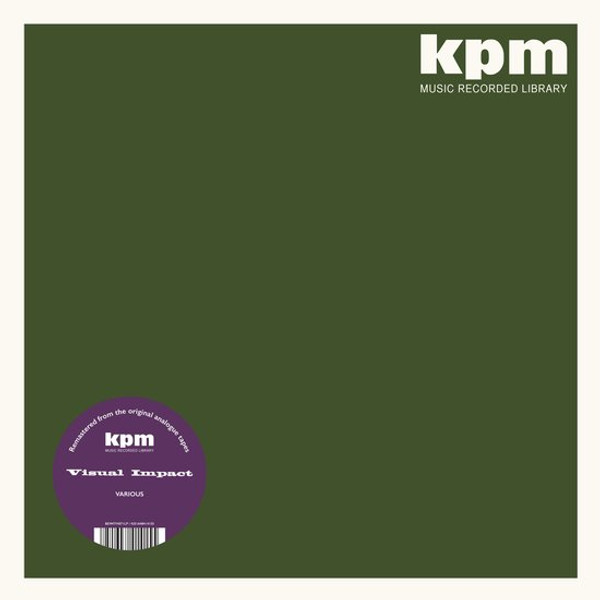