After years of mythology, misinterpretation, and procrastination Nurse With Wound's Steven Stapleton finally chooses Finders Keepers as the ideal collaborators to release "the right tracks" from his über-legendary psych/prog/punk peculiarity shopping list known as The Nurse With Wound List, commencing with a French specific Volume One of this authentically titled Strain Crack Break series. Featuring some Finders Keepers' regulars amongst galactic Gallic rarities, this double-vinyl dossier demystifies some of the essential French free jazz and Parisian prog inclusions from the alphabetical "dedication" inventory as printed the anti-bands 1979 industrial milestone debut. When Steven Stapleton, Heman Pathak, and John Fothergill's anti-band Nurse With Wound decided to include an alphabetical dedication to all their favorite bands on the back of their inaugural LP the notion of creating a future record dealers' trophy list couldn't have been further from their minds. By adding a list of untraveled European mythical musicians and noise makers to their own debut release of unchartered industrial art rock they were merely providing a suggestive support system of existing potential like-minded bands. Many of the rare, obscure and unpronounceable genre-free records on The Nurse With Wound List have slowly found their own feet and stumbled in to the homes of open-minded outer-national vinyl junkies, mostly without consultation of the enigmatic NWW map. Via vinyl vacations, on cheap flights and interrail tickets, buying bargain bin LPs on a shoestring while oblivious to the pending pension worthy price tags after their 40-year vintage, Stapleton and Fothergill, even if you've never heard of them, were at the bottom of the pit before "digging" became pay dirt. The List has been mythologized, misunderstood, and misconstrued. It's also been overlooked, overestimated, and under-appreciated in equal measures. Bolstered by the sub-title "Categories strain, crack and sometimes break, under their burden," all bands on the inventory (many chosen on the strength of just one track alone) were chosen for their genre-defying qualities. Forty years after Nurse With Wound's first record, Finders Keepers, in close collaboration with Steve Stapleton remind fans of this kind of "lost" music, that there once existed a feint path which was worn away decades before major label pop property developers built over this psychedelic underground. A collaborative attempt to officially, authentically, and legally compile the best tracks from the list, succeeding where many overzealous nerds have deferred. The first volume of the series focuses exclusively on individual tracks of French origin, the country that unsurprisingly hosted the highest content of bands on the list. Comprising of musique concrète, free jazz, Rock In Opposition, Zeuhl School space rock, macabre ballet music, lo-fi sci-fi, and classic horror literature inspired prog. 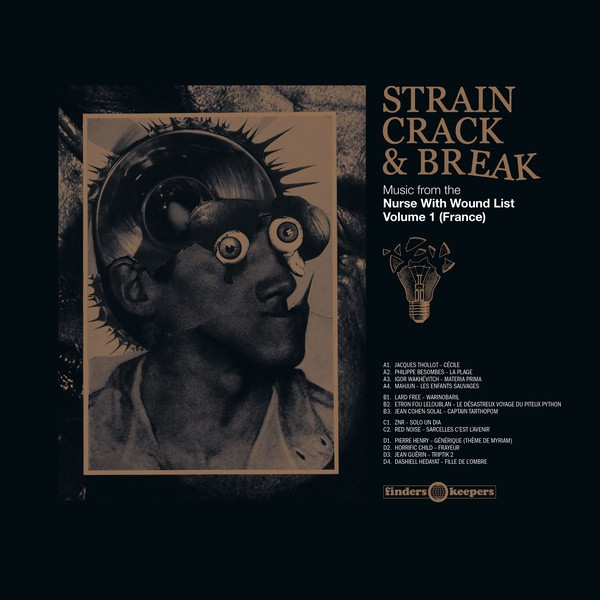