Subtitled: ... That We Are Not Allowed To Mention For Legal Reasons. Rare and brilliant music as used in the late 1960s amazing animated series we are not allowed to mention for legal reasons. And the same music was used in all the NFL clip shoes throughout the '60s and '70s too. Way back in 1967, an animated superhero cartoon was released into the world. It was created by Grantray-Lawrence Animation and was based on a web-spinning, crime fighting blue-and-red dressed character that had originated in 1962, through Marvel Comics by Stan Lee and Steve Ditko. This amazing series ran on ABC TV in the USA, then Canada, then a few years, it ran in the UK. The series was notoriously low budget. After Series One the company Grantray-Lawrence went bankrupt, so the amazing spider series was taken on by producer Steve Krantz. He brought in new talent, including animation director Ralph Bakshi who later went on to turn a Robert Crumb strip cartoon into the feature Fritz The Cat (1972). Krantz also slashed the already cripplingly small spider budget and brought in the idea of using economic library music. Here, thanks possibly to an independent sync agent production turned to the KPM catalog. This was one of the few really established library catalogs around at the time with a modern edge; it was full of fabulous, modern dramatic music tracks -- often all on the same LP. But more importantly all the tracks were far longer than the one-minute musical cuts that many of the fledgling USA library companies were issuing at the time. Krantz produced two amazing spider series, and both were smothered with KPM music. In fact barely a spider second goes by without music playing in either the background or foreground. For many enthusiasts this really is formative music -- a junior foray into hip swinging crime jazz and esoteric musical grooviness. So, what features on this Spider-Jazz LP? Well it's music from the amazing TV series, but, not music from Series One. No, but it is all from Series Two and Series Three. From looking at archival cue sheets, over 50 tracks from various early KPM 1000 series albums were used across the episodes. It's all distilled down into one exciting and enthralling LP. Features Syd Dale, Johnny Hawksworth, Bill Martin/Phil Coulter, David Lindup, Johnny Pearson, Keith Mansfield, and Alan Hawkshaw. 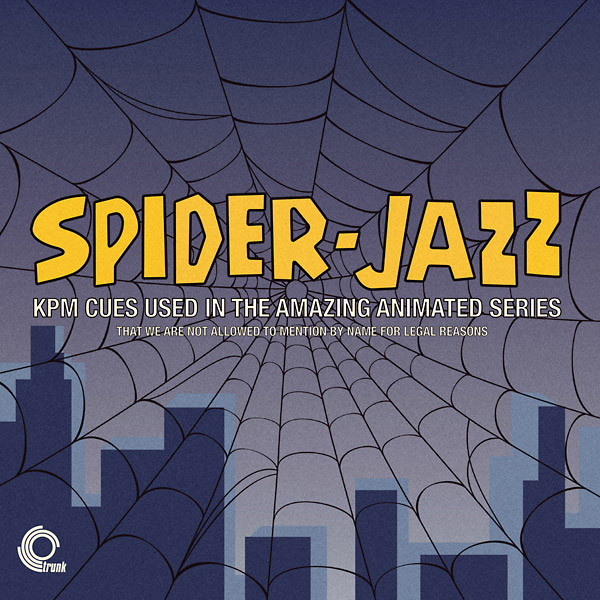