Wewantsounds release Sharayet El Disco a selection of Egyptian '80s disco and boogie tracks curated by Egyptian DJ Disco Arabesquo from his vast collection of cassettes. Most tracks have never been released on any other format and are making their vinyl debut with this set. A journey through the funky sound of '80s Egypt, Sharayet El Disco (which can be translated by "Disco Cassettes") features Simone, Ammar El Sherei, and more obscure names from Cairo's cassette culture. Sharayet El Disco is part of an important mission for Moataz Rageb aka Disco Arabesquo. The Amsterdam-based Egyptian DJ has been collecting cassettes from Arab-speaking countries and its diaspora for many years and has amassed a vast collection of Egyptian music concentrating on the '80s, the sound he grew up listening to. His goal has been to search for these rare sounds and make them known to a new vinyl-hungry audience. During this decade, the rich Egyptian music industry, which had seen such stars as Oum Kalthoum, Abdel Halim Hafez, and Warda take the Arab world by storm in the '60s and '70s, was going through a new phase and the cassette format was the cause. This radical change enabled many young musicians and producers to spread their music directly to consumers duplicating cassettes themselves. A new vibrant music scene erupted in Cairo blending their sound with trends coming from the US and Europe including, of course, disco, soul, and funk. The cream from this scene was soon picked up by the most daring labels, including Mohsen Gaber's Alam El Phan, Sout El Hob, and Americana. Sharayet El Disco gives you a glimpse of these great tracks which -- for most of them -- were only ever released on cassette. The set is a unique insight into the diversity of the Egyptian disco sound, from the pulsating disco of "Hezeny" by Hany Shenouda's Al Massrieen band to the boogie of Simone's "Merci", via Firkit El Asdekaa's tongue-in-cheek "Eklib el Sheriet" ("turn the cassette to the other side"), produced by legendary Egyptian musician Ammar El Sherei. The music is both inventive and funky and played with both Western and Arab instruments proving that quality of Egyptian music. Audio remastered for vinyl by David Hachour/Colorsound Studio in Paris. LP artwork by young Egyptian graphic designer Heba Tarek. Includes two-page insert featuring artwork of the original cassettes plus insightful liner notes by Moataz Rageb. Also features Afaf Rady, Dr. Ezat Abou Ouf & el four M, FIrkIt el Ensan, Eman el Bahr Darwish, Firkit Americana Show, and Lebleba. 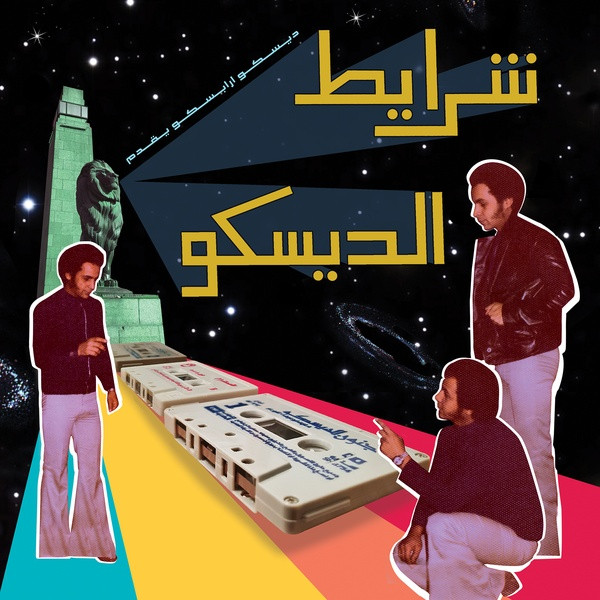