Like his buddy and occasional collaborator Quentin Tarantino, Robert Rodriguez is one of those film directors whose movies always come with incredible soundtracks. But it’s tough to top the array of music he assembled for his gun ‘n’ guitar-slinging western Desperado, the 1995 sequel to his breakthrough debut El Mariachi. Not only was the Desperado score composed and performed by the L.A. bands Los Lobos (whose performance of “Mariachi Suite” won a Grammy for Best Pop Instrumental Performance) and Tito and Tarantula (memorably seen the following year as the house band at the Titty Twister in Rodriguez’s From Dusk Till Dawn), but it also boasted contributions from Dire Straits, Link Wray, Carlos Santana, and the Latin Playboys among other artists. A blend of ranchera, Chicano, and garage rock, it’s the perfect accompaniment for the blood-soaked imagery of the film…and for this, the first vinyl release of the soundtrack, we at Real Gone Music have created the perfect visual accompaniment as well. For the gatefold jacket housing our 2-LP set, we commissioned Illustrator Matt Ryan Tobin to create one-of-a-kind, never-to-be-reprinted illustrated artwork, a lyrical yet lurid tableau that was approved not just by Robert Rodriguez but also by all four actors depicted (Antonio Banderas, Salma Hayek, Steve Buscemi, and Joaquim de Almeida). And, for inside the gatefold, we designed two 4-color inner sleeves offering production stills from the film, and pressed up 2500 copies in sultry “Blood & Gunpowder” vinyl. This release is exclusive for Record Store Day/Black Friday, and, again, both the jacket and the colored vinyl will never be reprinted…this might be the most collectible release we have ever created! 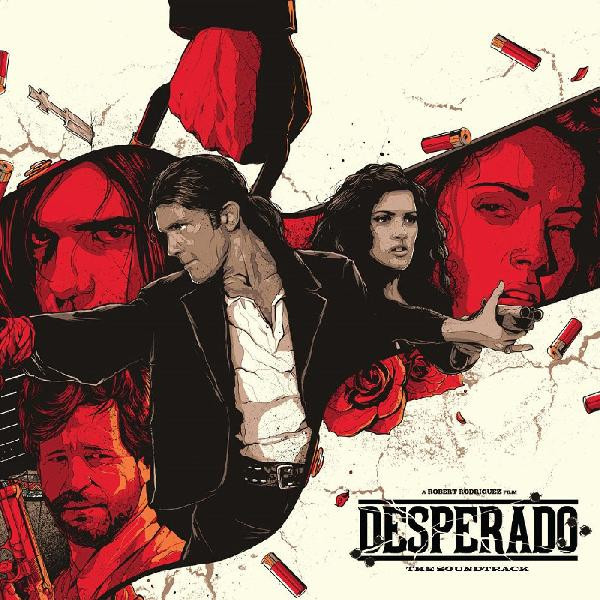