Deep, deep, earth music from Tsutomu Ōhashi and the Geinoh Yamashirogumi crew. A macrosymphony composed for the International Garden and Greenery Exposition in Osaka, Japan, 1990, Ecophony Gaia, was supposed to be the stunning, aural centerpiece for a light and water performance system echoing the sentiment of the venue: "Harmonious Coexistence of Nature and Mankind". Ecophony Gaia was in its truest essence the final part of a trilogy that began with 1986's Ecophony Rinne, continued, in 1988, with their most-known work the soundtrack to Katsuhiro Otomo's dystopian, cyber-punk film Akira (released as Symphonic Suite Akira), and this release mere months later. Looking back one can break up these releases into a holy musical trinity: Ecophony Rinne = spirit, Symphonic Suite Akira = body, and Ecophony Gaia = Gaia/earth. Ecophony Gaia is Geinoh Yamashirogumi's most hopeful release. Rebirth, the hardest thing to capture in music, is something Ecophony Gaia expounds upon through sonics and feeling. You hear this in light echoes from Symphonic Suite Akira coursing through Ecophony Gaia, acting as symbols saying: "not everything from the past needs to be discarded, that certain things, when rethought of, hold a heavier power". The Japanese Noh music you heard trapezing through Akira's "Illusion" walks positively untethered in Ecophony Gaia's "Euphony", Indonesian gong chimes that hit darkly in Akira's "Tetsuo" transform Ecophony Gaia's "Catastrophe" into the light sublime, serene music that it is. What's left over are the songs that point to new directions. Those that derive their influence from things that aren't easily quantifiable. The introduction of field recordings to a warmer palette of sound makes Ecophony Gaia Geinoh Yamashirogumi's first roots album. Of course, these roots belong to worldlier kind of music. Rhythms that sound like water coursing downstream from brook to ocean, electronic layers that hum and cycle through, string instruments that hover like atmosphere, wind instruments that sound like air and breath, and the powerful sound of human voices presenting divinity through communal chant -- those all constitute the ecosystem of Ecophony Gaia. Things that you've heard/felt before, renewed in a different luster. When you hear the album, notice how there are two sides to its whole: "Chaos" ending in "Euphony", "Catastrophe" ending in "Gaia". It would be a disservice to describe the way it sounds, it's an album based on belief not premonition. All you'll find in Ecophony Gaia are movements. Hopeful movements. Needed movement. 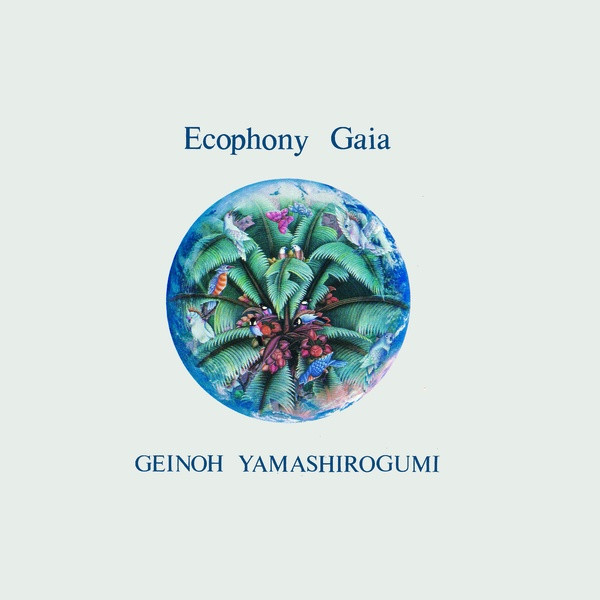