Vain marks the prodigal return of Venezuelan artist Carlos Giffoni to the avant-electronic music scene he was instrumental in shaping with the seminal, hybridiszng No Fun Fest and No Fun Productions label, which was home to debut releases by Oneohtrix Point Never and Noveller, and classics from Haswell and Prurient during the late '00s to early part of the '10s. Carlos's first new release in six years, Vain was drawn from hundreds of hours of improvisations made at Carlos's Malibu studio, the final LP describes a tumultuous narrative in affective abstract swells and pulsating rhythms that trigger curious sensations and emotions ever familiar to his variegated, extreme, yet essentially organic output. Despite not releasing anything for the past six years, Carlos still sounds like he lives and breathes electronic music. Where those "noise" artists who originally played at No Fun Fest and released on his label have arguably carved out major career paths from myriad mutated genres, Carlos's music still feels captivatingly ancient yet advanced and uncannily hypnotic. In a cascade of minimalist Arps and cloud dynamic harmonies, the album's story starts in the vortex of "Vain's Face" and sweeps through the granular flux of "The Desert" to a staggering piece of noise techno dissonance in "Erase The World", which calves away into the curled plunge of "Hands" and the anxious needling of "We Pay The Price". At the mid-way point it turns lusher with the pulsing and coruscating kosmische tang of "Stop Breathing", leading to the metric complexities woven into "Faith And Pain" and the heightened high-register sensitivities of "I Can Change", whose shatterproof hyaline steeples ultimately deliquesce into the shimmering beauty of "Sun Rain". With hazy resolution and ambiguity of effect, the record works its magick in memorable style. Like the best abstract sonics of Peter Rehberg or Keith Fullerton Whitman, an intuitively applied formula of geometry, rhythm, tone, and timbre add up to inexorable effect, rendering the closest possible connection between the machines and the artist's pathos. For synesthetes and attuned listeners, the effect is likely to conceive new colors on the mind's eye and move them to finer states of emotive response. In others words: it's a seriously good listen. Cover painting by Wiley Wallace. Master by Al Carlson; Cut at Dubplates & Mastering, Berlin. 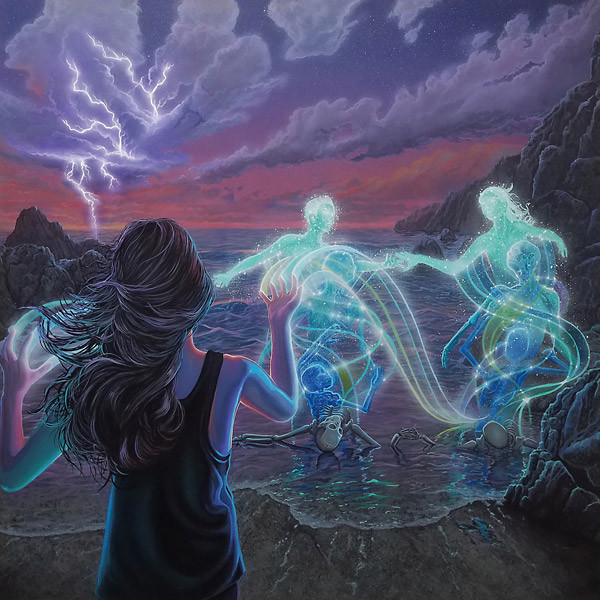