Licensed in 1975 by Gemelli, Rendez Vous is a holy grail in Bruno Nicolai's long-running career as a composer. The orchestra director and musical editor has been active for at least 30 years and his majestic opus is a must for any avantgarde freak or obsessive moviegoer. While studying piano and composition at the Santa Cecilia Conservatory in Rome, he befriended Ennio Morricone and formed a long working relationship with Nicolai eventually conducting for and co-scoring films with Morricone. Nicolai also scored a number of giallo exploitation films and wrote many scores for director Jesús Franco. His work was featured in the Quentin Tarantino films Kill Bill: Volume 2 (2004) and Once Upon a Time in Hollywood (2019). Tension! Pretty much what this whole record is all about. An imaginary soundtrack that turned out to be an in-demand obscure library, Rendez Vous shows off the many skills of the composer and his alumni. Morricone is possibly playing muted trumpet in several episodes -- "Diffidenza" and "Subdolamente" --absorbing thrilling experiences similar to the Maestro soundtracks for Dario Argento's early movies (it's not the case that Nicolai was the conductor for several adventures in movie sound theater such as L'Uccello Dalle Piume Di Cristallo, Il Gatto A Nove Code or 4 Mosche Di Velluto Grigio). Rendez Vous is now ranked among the most adventurous of Nicolai's soundtracks, a unique combination of classic contemporary arrangements and superb jazz noir sketches. 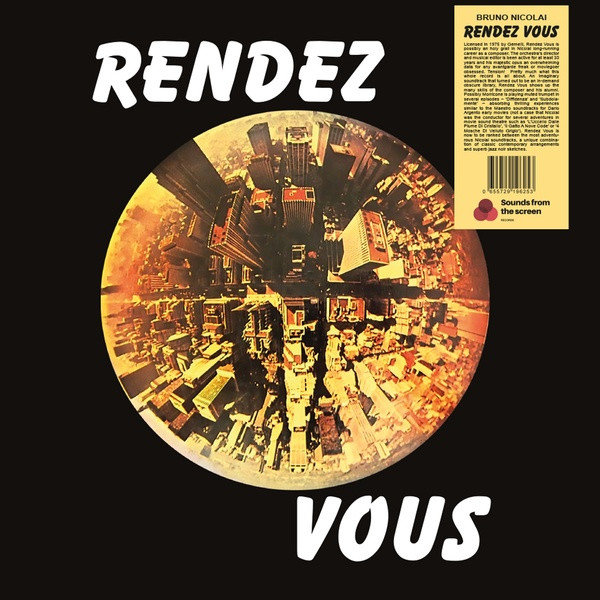