The first release by Transversales, a French label based in Paris founded by Sebastien Rosat and Jonathan Fitoussi, is the original soundtrack of the film Rock, composed in 1982 by Bernard Parmegiani (1927-2013). Parmegiani was a major figure of electro acoustic music and member of the historic GRM (Groupe de Recherches Musicales) where he composed an important work of concert, among which is the masterpiece: De Natura Sonorum (REGRM 009LP). The work of Parmegiani, a virtuoso of the magnetic tape, is widely known to the public even without their knowledge, through the famous title he composed for the TV program Stade 2, for the French radio France Inter, and also through the jingle adopted by Roissy-Charles de Gaulle Airport in Paris (1971-2005). Bernard Parmegiani produced a large number of jingles, soundtracks, and indicatives, but Rock stands apart in his repertoire. He recorded it without any outside constraints in his own studio. On listening to Rock, one is reminded of John Carpenter or François de Roubaix: a work which mixes the sounds of the TR-808 drum-machine, Synthi AKS, Farfisa organ, and Clavinet. Remastered from the original master tapes; Includes exclusive liner notes. Transversales specialize in the reissues of long lost tapes, rare original soundtracks, and library. Jonathan Fitoussi is a French composer residing in Paris. He works on minimalist and contemporary musical forms. He's also audio restoration engineer at INA and INA GRM. Sebastien Rosat is a French music supervisor working for films, TV, and advertising. He's also a member of French electronic duo Sommet. 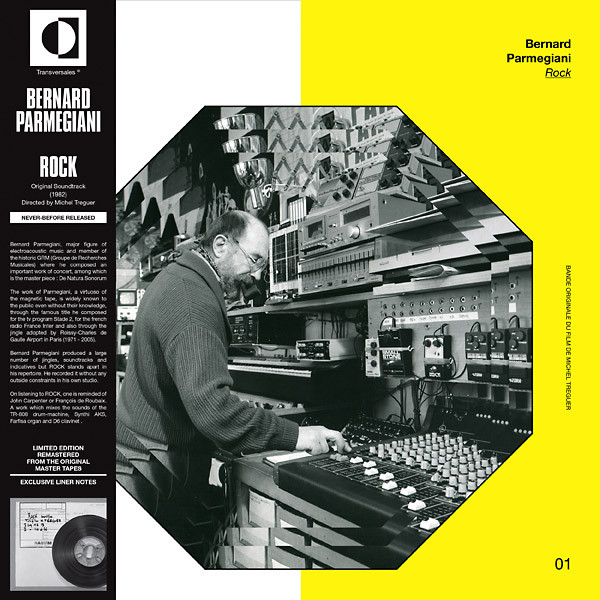