Angela was the studio project of husband/wife duo Angela and Ingo Werner formed in 1981 in Rüsselsheim, Germany. Ingo had classical training in bassoon and piano at the Akademie für Tonkunst in Darmstadt from 1966-70. He joined Krautrock band My Solid Ground in 1971 before going on to form his own project Baba Yaga in 1974. In the late 70s he formed the ensemble AIR with Armin Stöwe and Reinhard Karwatky. The project debuted with a a concert at ARS Electronica Competition in Linz, Austria 1980, which they won. Klaus Schulze was on the jury with Wendy Carlos and Robert Moog - but more importantly, Angela was in the audience. Two days later, Ingo told the band he needed a singer, so they asked Angela, and recorded two albums for RCA between 1981-82 before being dropped. Ingo wanted to work on a new project that involved dancers and live video. They recruited American performance artist Jyl Porch, who was living in Munich, to assist with choreography with her friend Kirsten McKenley. Jyl ended up recording her own album first, which gained interest from Klaus Schulze, who helped them secure a deal with EMI in 1983. Later that year, the trio recorded 4 songs that would be released on Angela ‘Fantasy’ single on 7” and 12” formats in 1984.

The music on ‘Fantasy’ was completely created with computer software of Ingo’s own design. The concept of a polyrhythmic, polyphonic, and polydynamic sequencer was realized by Ingo after a visit to Wolfgang Palm in Hamburg. He paired his sequencer with Palm’s legendary PPG Wave Computer System, allowing for more dynamic and nuanced programming. Angela programmed the music, sang, and wrote the lyrics to “Painted Love”, while Ingo arranged and played all electronics and keyboards. Jyl wrote the lyrics for “Fantasy” and the slow and sleazy, electronic disco B-side “I Gotta Little Love”, where she also sings background vocals and the “hot little flame” rap. The original B-side to the 7” version was a cover of the 1967 Hal Hackady and Lee Pockriss song “Kites”, made famous by Simon Dupree and the Big Sound. All songs have been remastered by George Horn at Fantasy Studios in Berkeley. The EP features the original 1984 cover artwork with a striking photo of Angela styled by Jyl in severe Neue Deutsche Welle fashion, and includes an insert with lyrics and and photos designed by Maycec. 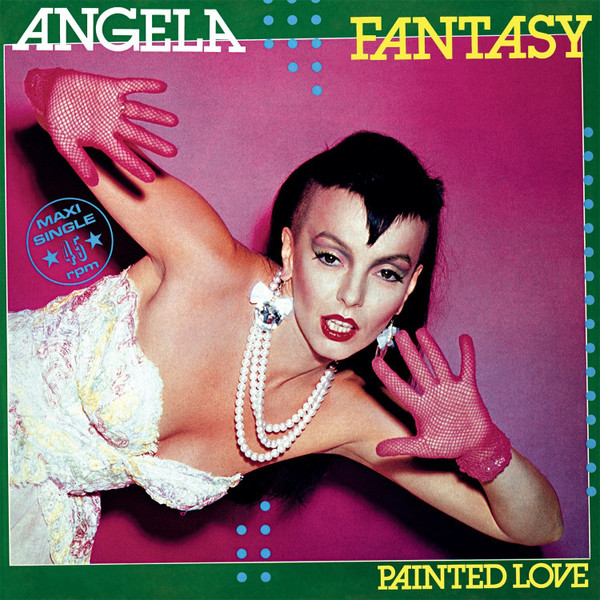