Imagine if you will, a forbidding castle on a hill, shrouded in darkness on a stormy night, somewhere in northern Italy: deep down in an ominous dungeon, an ancient ceremony is well underway. Shrouded figures, melting wax candles, and a painted white pentagram on the floor are the first visible adornments as a young virgin, clad in white, stumbles into view. Chants that haven’t been heard in five hundred years add to the cacophony of sounds that greet your ears. Finally, a vaguely familiar man that you swear you’ve met before, appears. As he approaches the woman, your sense of fear sharply contradicts an overwhelming, yet oddly disturbing, sense of eroticism. Could your sensibilities be deceiving you? But alas, this is merely the beginning of your journey through the dark kingdom of lust, where pain becomes pleasure, and the eternal light at the end of the tunnel grows more luminous than ever. What film is this, you ask? These murky cinematic visuals come from the mind of Alex Puddu, and what you are holding here is the official soundtrack to this non-existent piece of battered, scotch-taped celluloid. This peculiar scenario, with its Poe-esque castle dungeon setting (a nod to The Pit & the Pendulum) and satanic ritual, provides the inspiration for the music that would manifest itself in this album. Clearly influenced by the films of Mario Bava, Vincent Price, Roger Corman, and other masters of the macabre; Alex Puddu guides us through the gothic cinematic landscapes of 1960s through 1970s Italian horror B-cinema.

The Mark of the Devil represents the last of a trilogy of albums produced in collaboration between Alex and famed Italian vocalist and Ennio Morricone singer, the incomparable Edda Dell’Orso. With orchestrations by her husband, the legendary Giacomo Dell’Orso, Puddu’s compositions take on an eerie life of their own. The first two albums with Dell’Orso (2013’s Registrazioni al buio and 2016’s In the Eye of the Cat) were tremendous accomplishments in both composition and performance. I could have easily been fooled if someone had told me that these were lost tapes from Piero Umiliani’s Angeli bianchi...angeli neri sessions. Miss Dell’Orso is absolutely flawless, and maestro Dell’Orso’s orchestrations are simply divine. Even the track titles on this album sound like a forgotten film titles from the golden age of Italian horror. This record tells quite a story. Let’s walk through it, shall we?

The Mark of the Devil is the story of a journey into Hell and of the erotic temptations that ensue (as only Alex can tell it). “Il sogno, il fuoco” sets the mood with its flamenco guitar, percussion, and strings – not to mention the stormy sound effects…a very nice touch. This short library-style cue is the prelude of the story as it segues into the second cut (and the first to feature Dell’Orso): “The Haunted Palace” is a lush number featuring synth, strings, horns, and of course, that illustrious voice. The premise of the track is that we, the listeners, are discovering the excitement of a dissonant new evil and forbidden temptation. Next is “Tentazioni” – a beautiful avant-garde funk groover that greets us and, much to our initial resistance, doesn’t let us out of its grasp. “Incontri notturni” lures us into the void of obscenity with its sexy sax work, and it’s all over as “La carne e il paccato” grabs a hold of us for good - another smooth jazz number with lovely organ and, of course, that tempting voice! Finally, we lose it all with “Il canto delle vergini” and there is no return at this point: and seriously, who would want to? “Ombre e distorsioni” kicks off side B with an uptempo vocal number featuring chanting, fuzz guitar, and more Dell’Orso vocals! Things are definitely getting out of hand…at this point, it’s safe to say that the Devil has got our souls. We flashback to our first encounter with the dark lord in “Confessioni a venezia” – another avant-garde track with lingering sax, layered with percussion, organ, and scat vocal. In “The Whip” we find ourselves in a tunnel of joy, where pleasure is pain – and trust me, you’re going to want to stay awhile. Things come full circle in “Il settimo cerchio” when we realize that we are in some sort of Dantesque divine comedy – a journey through Hell indeed. Finally, we take our final steps through the gates of Hell with “Mother of Tears” and “The Beyond” and we can finally rejoice…we have arrived!

The music on this album is exactly the sort of sounds that we specialize in at our RENDEZVOUS events in Los Angeles – library and soundtrack music from the 1960s through early 1980s. Dark images abound on the big screen, our event has become quite the monthly gathering place for like-minded fans of cult and exploitation films, record and film collectors, and horror fans alike. Alex Puddu’s music first came into our radar with his 2011 release, The Golden Age of Danish Pornography. Of course, this record was, and continues to be, on constant rotation on the turntables. Open up my record box at any given time and you will find it in there, filed among my Cipriani, Alessandroni, Fidenco, and Micalizzi records, to name a few. Rest assured my friends, The Mark of the Devil is as well. Now to find some visuals to go with it. Any suggestions? 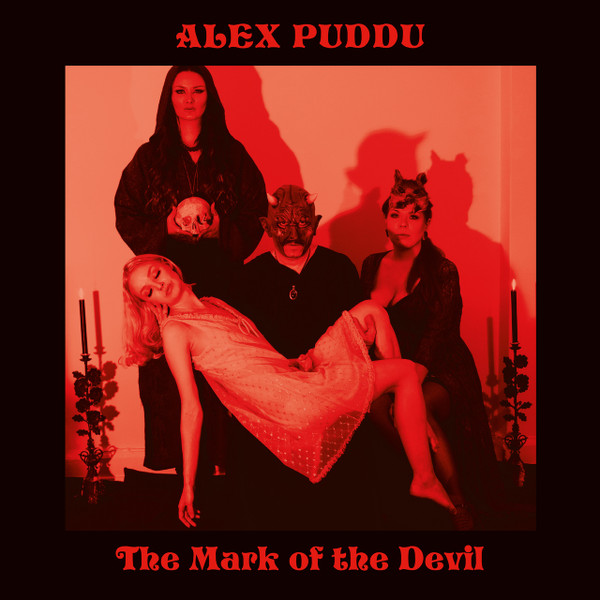