THE THING is a 1982 remake of the 1951 classic THE THING FROM ANOTHER WORLD. Both films were based on the classic story written by John W. Campbell Jr. THE THING tells the story of an American scientific expedition located at a remote research station in the Antarctic who have their routine interrupted by a crazed Norwegian who storms into their camp chasing a snow dog, firing shots at it with his rifle. Unable to reason with the Norwegian, they kill him and save the dog, not knowing that the dog is the host for a destructive alien-form that is able to mutate into other life-forms by infecting them and taking them over at the genetic level. As the scientists begin to unravel the mystery of the new organism they ve discovered and its potential threat, tension builds as they begin to distrust each other. With no way to communicate with the outside world, can they survive long enough for help to arrive or will some... thing else be waiting in their place?

The music for THE THING was composed by the great Ennio Morricone. Prior to THE THING, director John Carpenter had gained a reputation as a director who also composed the music for his own films and had begun collaborating with sound designer and fellow composer Alan Howarth on the music for his films. With the enormous success of HALLOWEEN and ESCAPE FROM NEW YORK, he found himself working for Universal on his first big studio film. Working with a larger budget at his disposal, Carpenter was able to hire one of his musical idols to score the film. The movie s final soundtrack, though, would be a combination of both Morricone and Carpenter s sensibilities. Characteristically, Morricone did not compose his score to picture. He composed many pieces of music inspired by the film he'd watched and by the directions he'd received from Carpenter. The music would be edited to fit the film as Carpenter wanted. During the post-production process, Carpenter decided he needed more music for the film and worked with collaborator Alan Howarth to produce some additional electronic music.

The original 1982 soundtrack release for THE THING featured Ennio Morricone's score for the film, including a wealth of music that ultimately did not get used in the film. For this new release of music from THE THING, the music has been produced and arranged by Alan Howarth and Larry Hopkins, to include newly recorded renderings of the Morricone music (including recreations of the tracks not used in the film) and Howarth has also provided new performances of the music he produced for the film with John Carpenter, making their premiere appearance on this album. The music is presented in a sequence closer to film order.

Alan Howarth, in addition to being a composer, is an accomplished sound designer and editor, having worked on films such as STAR TREK: THE MOTION PICTURE, POLTERGEIST, TOTAL RECALL, ARMY OF DARKNESS, BRAM STOKER S DRACULA, STARGATE and many others. He has been a frequent music collaborator with John Carpenter on his films beginning with ESCAPE FROM NEW YORK in 1980 and including HALLOWEEN II & III, CHRISTINE, BIG TROUBLE IN LITTLE CHINA, THEY LIVE and PRINCE OF DARKNESS. 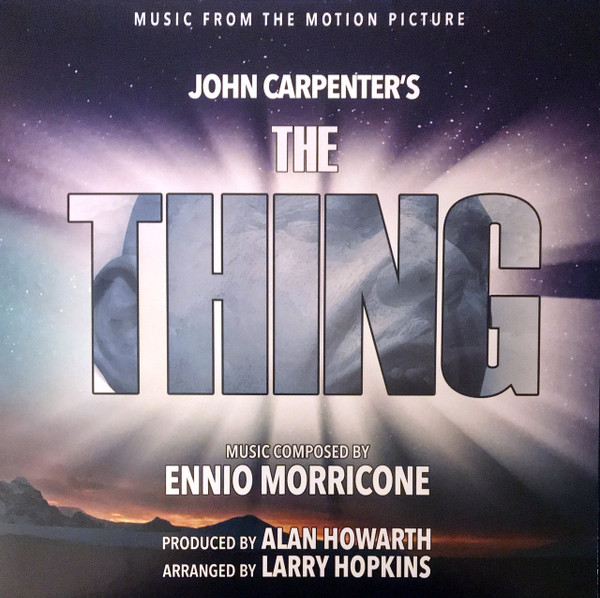 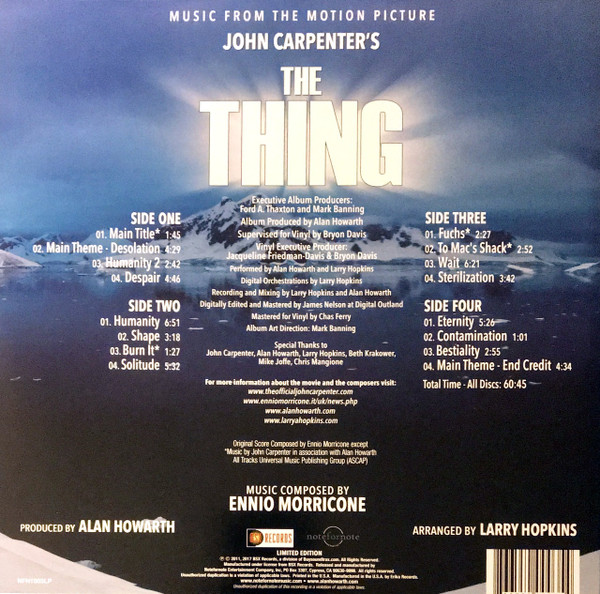